Are Christians Ignoring the Central Theme of the Jesus Story? 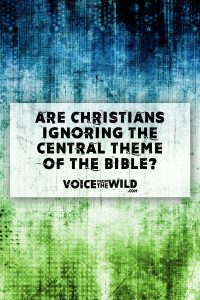 I saw this post on Facebook the other day, which was posted by a megachurch in my area. It read, “We hope that you’re having an incredible Saturday and are expectant for God to do something amazing at our services tomorrow.”

Now, when they say “we hope that you are expectant for God to do something amazing at our service”, I can almost picture God as a Tony Robbins type of character who comes swooping in to fix everyone’s problems or a genie who pops out of a magic lamp to grant everyone’s wishes.

What is the “something amazing” that God will supposedly do? Well, I was at this exact same church a few years ago and before they took up the offering they showed a video of people giving testimony of how they had given faithfully and then they experienced some kind of miraculous financial breakthrough. It was obvious that this video was specifically designed to stir the congregation towards giving which I think was kind of disgusting.

The thing is that churches like this aren’t much different from any other institution that caters to a consumer culture. They’re in the sales business and what they’re selling is the same thing that everyone else is selling: something that will make us happy.

Pretty much any advertisement can be summed up in this one sentence: “You are not happy, so buy our thing and then you will be happy” or at the very least, a little bit happier than you are now. Another variant of the sentence could be: “You are suffering and our thing will take away your suffering.”

We believe that if we could only get “that thing” – whatever “that thing” might be – then all will be well. When it comes to churches like this, they’re selling the idea that their religion is the means to that end and that their God will give us “that thing”. But this is where I believe that most modern day Christians completely miss the point of the Bible.

You see, the thing that we are really after is certainty. We want to believe that there is some kind of system that, if we could figure it out, would guarantee that we always get what we want.

In the Biblical times, this system was known as the temple and the temple was extremely important in Jewish life. If you were a Jew in the Biblical times, your entire life revolved around the temple system. The temple and the sacrices offered there was the thing that guaranteed God’s covenant with his people. The temple was the thing that gave people certainty. As long as they kept the sacrifices and offerings comig, everything would be okay. Yet, what we see happening time and time again is that the temple is ransacked and destroyed. The very thing that’s supposed to guarantee certainty kept on failing them.

Now we’ve done the exact same thing with Jesus. We pray the blood of Jesus over this and that situation like a magic spell and hope that things will turn around. The preacher in the shiny suit tells us that we will get that breakthrough if only we would get up out of our seat and answer the altar call. We’ve turned Jesus into a means to an end – a system that will guarantee certainty.

But the truth is that life sucks. Sometimes things go our way, but other times it doesn’t go our way at all and then we’re left scratching our heads, wondering why God didn’t come through for us.

I believe that the real story of the Bible is that the Jews were in this same head scratching position when their temple was destroyed and so were Jesus’ followers when their messiah was captured and crucified. But the hope that we find is that after death comes resurrection, if we are prepared to go through the process.

The cross of Jesus isn’t some magic wand that we wave around to take away suffering. It’s an invitation for us to enter into our suffering and come to terms with it. Every time we lose, fail, suffer or hurt, we are – hopefully – transformed into someone better, someone stronger and someone wiser as we shed the old and allow the new to emerge from the tomb.

This, I believe, is the central theme of the Jesus story.