If you Love them, Let them Go (Loving without Attachment) 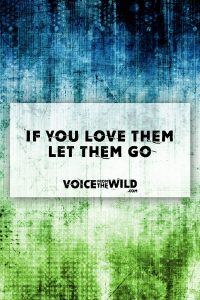 There’s a story in John’s Gospel where Jesus was crucified and according to the story he was raised from the dead after three days. Whether one believes that this story is literally true or not is beside the point, because I believe that regardless of whether or not it’s true, there is something we can take from his words.

After he was buried, his mother Mary went to visit the tomb and found it empty. She then turned around and saw Jesus standing behind her, but at first she didn’t recognise him and mistook him for the gardener. She asked him if he knew where they had taken Jesus’ body and then he said to her, “Mary” at which point she realised it was him. She cried out, “teacher!” And then he said something to her which seems really cold and hurtful; he said, “Do not hold on to me, for I have not yet ascended to the Father.” (Joh 20:11 -17 NIV)

There’s something really painful in these words of Jesus. Mary just watched him being killed in the most horrific way and she though he was dead. The next moment, he’s back and she’s probably elated to see him, but then he tells her not to hold on to him because he’s going to go away again. If you’ve ever lost someone – whether it’s through a death or a break-up – then perhaps you can relate with me and feel the pain attached to these words: “Don’t hold on to me”.

Both Jesus and the Buddha preached non-attachment and it’s funny that Jesus would say these words to Mary – “don’t cling to me” – almost as if he’s saying it to all of his followers, yet clinging to Jesus is exactly what Christians have done. You see, we want to believe that there is someone or something that we can cling to that will make everything okay and bring us everlasting happiness, and in this case, we’ve done it with Jesus even though his message is “don’t cling; not even to me.”

Is it possible to love without attachment? Popular culture would have us believe that it is not. We’ve been conditioned to think that there is a perfect person out there and if we want to live “happily ever after” we need to cling to that person. There’s a popular song by Megan Trainor and John Legend that says, “I’m gonna love you, like I’m gonna lose you.” So, essentially, “I want to cling to you; I want to possess you and never lose you.” And that might sound very nice and romantic, but the reality is that those kinds of relationships are based on fear and insecurity and often become a self-fulfilling prophecy. I’ve seen this play out in my own relationships. When lovers are so afraid of losing each other, they start projecting that fear onto one another. They start seeing all the reasons why they should doubt each other and that anxiety starts causing all kinds of problems in the relationship and instead of keeping the person, they end up pushing them away. More often than not, clinging has the exact opposite effect than what is intended. Once again I’m reminded of something that Jesus said: “Whoever wants to save their life will lose it.” (Matt ‭16:25 NIV)

Years ago families or tribes used to form alliances with other families or tribes and the way in which they secured the alliance was through marriage. One tribal leader would offer his daughter in marriage to the son of another tribal leader or vice versa and this union would ensure that the alliance would be honored by both parties. This rarely happens in the modern world, yet official marriages are still a big thing. Couples sign documents that basically say that they now possess each other and they can’t leave unless they are willing to pay really hefty legal fees. Yet, between 40 and 50 percent of marriages end in divorce and so we discover that we can’t possess another person even if we marry them.

Don’t get me wrong; it’s not that I don’t believe in marriage; I believe in the other 50% which are healthy marriages where both people have enough of a sense of security within themselves that they don’t fear losing the other person and if that is the case – that you’re not afraid that the other person will leave you and that you trust that they’re with you because they truly want to be – then why the need to sign a legal document? Again, it’s not that I’m against marriage, but it’s just a thought.

I’m probably the last person who should be writing about this, because my track record with relationships isn’t very good and I’ve been through a divorce myself. But on the other hand, I think I might be in a perfect position to write about this because I’ve made all those mistakes and hopefully I’ve learned from it. When I got married, I was in love with the idea of being married – having a wife and a family of my own – and I thought that having those things would bring me happiness and although we had good times, it didn’t quite work out that way. There came a point where my wife didn’t want to be with me anymore and although I didn’t want to get divorced because I believed in the sanctity of marriage, I had to let her go eventually. Today she’s married to a guy who I honestly think is perfect for her and I’m happy for her. If you love someone, you have to let them go; you have to give them the freedom to choose you, but that also means that you give them the freedom to choose someone else.

More recently I went through another break-up and it was really hard, but I also approached it with an attitude of non-attachment. This doesn’t mean that it didn’t hurt and that I don’t miss her, but she didn’t feel that our paths in life were aligning, so I had to let her go so that she could find someone with whom her path would align. And again, if she finds that person, I’ll be happy for her or if she comes back I’ll also be happy. That’s the point of non-attachment; you find a way to be happy either way.

We tend to forget that the person we’re holding onto is also a human being with wants and needs and feelings. So, if they want to leave, then we must let them leave because otherwise we’re putting our own happiness before theirs, which is kinda selfish and love is not selfish; it’s the opposite.

I’ll end with a quote I put on my Instagram the other day: “Try not to confuse ‘attachment’ with ‘love.’ Attachment is about fear and dependency, and has more to do with love of self than love of another. Love without attachment is the purest love because it isn’t about what others can give you because you’re empty. It’s about what you can give to others because you’re already full.” – Yasmin Mogahed