The Problem with Being Progressive 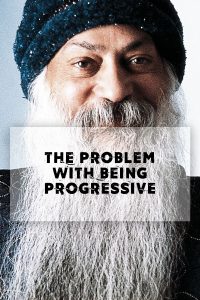 I recently watched a series on Netflix called Wild Wild Country. The documentary tells the enthralling story of a commune which was started in the seventies by the Indian Guru, Rajneesh Bagwan, also known as Osho, and his followers. The vision of the Rajneeshees, as they became known, was to start a progressive community that would model a new way of being for society; a way of being that would be built on love; where people would work together for the common good of the community as opposed to living and working for themselves.

But as the plot thickens, the culture in the leadership of this community becomes just as corrupt as the culture they supposedly progress away from, if not worse. One example of just how corrupt the Rajneeshees became is a story of how they poisoned a whole town. Their motive was to prevent the people from the town where the commune was situated from voting in an election.

So, the problem with being progressive is this: When a group of people begins to progress away from certain worldviews; more often than not, they end up becoming just as corrupt as the people that they supposedly progressed away from. And it’s not that they start out with bad intentions; the Rajneeshees started out with best of intentions. But once they got a taste of power, they became blinded by their own idealism. And that is the trap that mankind always seems to fall into – idealism.

Idealism is the belief that some kind of perfect condition is possible. This belief might be held by a political party, revolutionary movement or a religion. The feeling then arises that if only we could convince everyone to see things our way, this perfect condition could be achieved. On the more sinister side to this belief is the feeling that if only we could eliminate everyone who doesn’t see things our way, this ideal condition could be achieved. But again, most of the time it starts out with good intentions – the desire to make the world better. But when the progressive movement begins to pick up momentum and get a taste of power, most of the time it begins to corrupt.

Why does this happen? Well, Joseph Campbell said that, “As soon as it (transcendent energy) enters the field of time, it breaks into pairs of opposites and the one becomes two.” And then he pointed out that when things divide into pairs of opposites, there are only three ways in which they can relate to each other: “One way is of this one dominant over that; another way is of that one dominant over this; and a third way is of the two in balanced accord.”

It’s quite simple really; the way the ego establishes itself is by measuring itself against a perceived other. I know that I am tall because I can measure myself against someone who is short; I also know that I am a man because I can compare myself to a woman and that I am white because I compare myself to someone who is black. And for the most part this is fine when it comes to exiting in the world as individuals. But the problem arises when I begin to imagine myself as being better; when I assume a dominant position over the perceived other.

In the case of the Rajneeshees, they began to imagine themselves as being better than the rest of the world that wasn’t as progressive and enlightened as them. They believed that their version of an ideal world was the only one and that idealism began to consume them.

Imagine for a moment that there’s a guy named Timmy. Timmy grows up in a Conservative Christian culture; a culture that imagines a better world. They imagine an ideal condition which they believe could be achieved if everyone converted to Christianity. But in its zeal to make the world a better place, this culture becomes somewhat oppressive. So, Timmy begins to see the holes in this worldview and how Christians tend to impose their ideas onto others. Now Timmy begins to imagine his own version of an ideal condition and he imagines that this ideal condition would come about if Conservative Christianity was eliminated.

With the best of intentions, Timmy sets out to do his part to promote tolerance. Timmy believes that if only he could convince the world to see things his way, this ideal condition would be achieved. But the world doesn’t see things his way, so he becomes more and more defensive of his views until he is no longer defensive, but offensive. Timmy believes that he is right when it comes to how the world ought to be. And suddenly being right becomes more important than being tolerant. Do you see now that Timmy has become guilty of the very thing that he held against his former culture?

At every point in human progression – when we think we’ve figured things out – we see this happening. Our culture thinks that it has become so politically correct. But in the pursuit of political correctness, the left has become just as intolerant and oppressive as the right. Look around and tell me you don’t see it too. I would imagine that being politically correct means to bring balance back to a society – the third way that Joseph Campbell spoke about. Instead, it would seem that political correctness is just another attempt at dominating oneself over another; to prove that I am right and you are wrong.

Maybe human progression is less like a bullet train and more like a pendulum that swings from one extreme to another. When it finally begins to slow down and finds balance within itself; perhaps then we can say that we’ve progressed.